Concerts in the home country

The year 2009 again brought many gigs with the Steve Gibbons Band and the Dylan Project. A gig with Gibbons own band in May at the Pacific Road Arts Centre, Birkenhead, is documented on You Tube, but in dubious sound and picture quality.

In his hometown of Birmingham he performed at the Lord Mayor Show. At this show, the Lord Mayor, who changes every year and has a more representative function, is bid farewell and the new Lord Mayor is welcomed at a free open-air concert. At that time the office passed from the 99th Lord Mayor, the Pakistan-born Chaudry Abdul Rashid to Michael Wilkes. Birimigham bassist Des Tong, who had played in 1979 on the Zeppelin Field in Nils Lofgren’s band, joined Steve Gibbons by this ocassion.

In the further course of the year, Steve Gibbon’s path together with his band actually led back to Nuremberg. It wasn’t the first time the band came back, as they have had a sworn fan base there ever since.

This time, however, they were to appear again in a very special ambience, namely at the Nuremberg Bard Meeting. This is a three-day open-air music festival held annually in the summer. Admission to all the concerts, which take place on several stages in the Old Town, is free, as the costs are borne by the city and sponsors. The event is regarded as Germany’s largest „free and outdoor“ festival.

It originated and took its name in 1976 when it was first held on the 400th anniversary of the death of the „Mastersinger of Nuremberg“ Hans Sachs. The Mastersingers were a union of medieval singer-songwriters, who were mostly craftsmen in their main profession. Steve Gibbons as a former plumber’s apprentice was therefore a perfect fit for the event also with respect to this background!

While in the early years, in keeping with the spirit of the times, political protest and love songs dominated the festival, it developed more into a multi-cultural festival. Singer-songwriters and bands from all over the world are invited, among them, besides some established artists, especially young and still unknown talents. Thus, already in the official program an interesting mixture results.

Since the performances take place on several stages, a constant stream of people of an average of 200,000 visitors floats through the city this weekend. This also attracts street musicians from Germany and abroad who play outside the official programme. Nuremberg thus becomes a bubbling and vibrating musical cauldron on these days until well into the night.

The Steve Gibbons Band played at Sebalder Platz. There the stage is located on the northern flank of the mighty church, and the musicians look out over the audience to historic buildings that rise up to the castle and Albrecht-Dürer-Platz. There is a house brewery from which many listeners of the Bardentreffen are supplied with litre bottles of dark beer. So a relaxed atmosphere was guaranteed.

After the enthusiastically received concert, the band stayed in Franconia, because one week later in Fürth, not far from Nuremberg, the recording of a live DVD was planned.
Even though it was some years ago, this recording comes closest to what you can expect today when you see the Steve Gibbons Band live. Not necessarily in terms of song selection, but in terms of style. 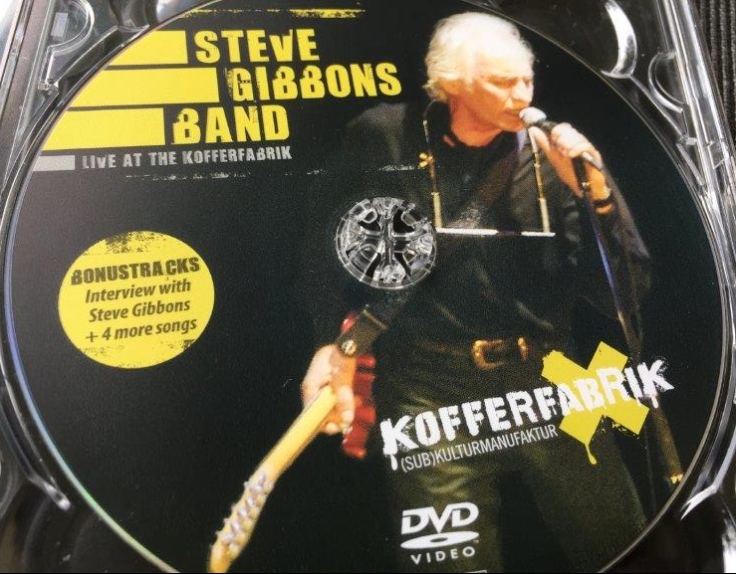 At the same time, this DVD allows you to understand some characteristics of Steve Gibbons‘ career:

This is a pity, because what is offered is finest music!

In our ears this live recording is the logical continuation of „Ridin`Out The Dark“ and belongs, together with the TV gig at the London Golders Green Hippodrome in 1977, which may be found on You Tube only, it belongs to the most compact and convincing live recordings of the band.

The Steve Gibbons Band appears in the line-up:

Intimate club with a special touch

After the open air concert in front of thousands of listeners the week before, two intimate club concerts were on the agenda. Place of the happening was the „Kofferfabrik“ (suitcase factory).

The Kofferfabrik is a free cultural centre in Fürth on the old factory site of a former suitcase factory and at the same time a cabaret stage with extraordinary projects as well as lots of concerts in the blues, klezmer, world music, jazz, ska and latin genres – and everything for which there is no room elsewhere. Furthermore, the Kofferfabrik offers a gallery with constantly changing exhibitions and an open stage for rock music and poetry slams. The theatre also hosts projects that would not find a place elsewhere.

Cult for years and meeting point of the (sub)cultural scene from Fürth and Nuremberg! This is the Kofferfabrik.

You could also say: The Kofferfabrik is a time bubble. Many old concert posters which announce artists and band from which you sometimes did not even know that they are still touring, on the wall, hardly any seats. All that’s missing is the cigarette smoke, and you’d be back in the 80s!

A good atmosphere for what can be found later on the DVD „Live At The Kofferfabrik“.

The accordion, violin and harmonica do not serve only as decoration but they are used extensively. Accordi(o)ngly, not the hard rock numbers are in the foreground, but there are many songs in slow or medium tempo, which are played with relish, leaving enough space for every instrumentalist. Beside rock, you can hear jazz influences, reggae and if there were French lyrics sung to the accordion in some places, the word chanson would probably not be far away.

In contrast to the many concerts of the band that the author has listened to, the share of four cover versions of 17 songs is relatively low overall. This is probably due to the aim of covering the spectrum of the band leader’s own compositions as comprehensively as possible on the DVD, which is quite successful with 13 pieces from all creative periods. Since the arrangements have been adapted to the current formation, there are no real breaks. The concert is all of a piece.

Reminiscences hidden in own songs

And, of course, reminiscences of role models are inevitable after all. Gibbons, as is often the case, puts them into his own compositions, mostly in the last third, where there is also opulent space for the individual instruments to unfold.

So you can hear excerpts from Elvis Presley’s „That’s Allright Mama“ in „The Memphis Flash“, in the song „Biggles‘ Fly’s Undone“ Gibbons sings the refrain of „She Loves You“ by the Beatles, and in the song (included as bonus track) about an immigrant in Birmingham „Home From Home“ the „Banana Song“ by Harry Belafonte is heard.

The more than 8-minute long version of „Down In The Bunker“, which is not based on tango but on a reggae rhythm, this is also worth listening to. Here you can hear set pieces from „I Am Only Sleeping“ by the Beatles, „I Don’t Wanna Wait In Vain“ by Bob Marley and „All Alongt The Watchtower“ by the other Bob.

Gibbons is somewhat more reserved than on many other occasions during the concert with his often very long, meandering spoken introductions, which sometimes seem to fit the following song like a fist in the eye – and then somehow still get the hang of it at the right moment.

A good example for this can be found in the bonus tracks of the DVD at the Bob Dylan cover „She Belongs To Me“.

Here you can also see from the camera work that with Nikolaus Struck and Irfan Taufik a crew that knows the band very well were at work here.

During the spoken introduction of Steve Gibbons the camera doesn’t only focus on him, but also captures the rhythm section.

So you can witness Johnny Caswell on bass and Howard Smith on drums, smiling and looking at each other, who probably want to say „Whatever comes to his mind today?“.

In moments like this you understand: Whoever plays with Steve Gibbons should be experienced, but not dependent on routine. Since he often implements spontaneous ideas, his musicians need a big amount of attentiveness, flexibility and reaction speed. Autopilot does`t work here!

The album contains a concert with 17 songs. These are:

There are also four bonus tracks, which were recorded separately. There are two original compositions, namely

As a bonus, there is also an interview with Steffen Radlmeyer, head of the art section of the „Nürnberger Nachrichten“, who has coined also the sentence „The world is unfair. If it were otherwise, a man like Steve Gibbons would have long since taken his place of honour in the hall of fame of rock ’n‘ roll and would perform in giant arenas“, which describes Gibbons career in just two sentences. Besides all kinds of anecdotes from Steve Gibbons‘ early days as a musician in Birmingham, his guest performances in military clubs in the 1960s and the failed supergroup project The Balls, Radlmeier elicits Gibbons also some basic statements about his understanding of music and concerts.

The starting point here is the question to Steve Gibbons whether he would see himself more as a songwriter, singer or storyteller.

In the answer we meet again Gibbons`preference for literature and dramaturgical formats as he answers:

I think it is a combination of all three.

I like songs with a beginning, a middle and an end. As a kid I loved poetry and I loved stories.

And I tried to introduce that in my songwriting. Because I think people, audiences like stories. I like to take them through an event. I feel the same way about a performance:

You don`t have to stick to the same stepping stones, but you can make an athmosphere. And then the people go away and feel like they have been on a kind of journey.

And that`s the way I like to treat my live performances.

Sound rehearsal on the internet

Andy  Sperber, who together with Philip Durham did the mixing for the DVD produced by Udo Martin, is (rightly) proud of the result of his work. That’s why he has put two of the tracks he mixed („The Mississippi Flash“ and „All Right Now“) on the internet as work samples. You can listen to them here:

In October of that year Gibbons performed at the Bearwoodstock Charity Show. One of many appearances at charity events. That’s what it’s like to be a musical honorary in a city: Whether the mayor calls or the charity, you should be there. That’s just the way it should be.