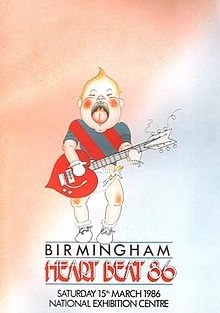 After the top album „Saints & Sinners“, no new recording of the Steve Gibbons Band followed for four years. In 1985, „Tried`n`tested“ was released, a cassette recorded in the Rich Bitch Studios, Selly Oak, Birmingham, which was sold at concerts around 1985.

This was probably an attempt to adapt to the new situation, to provide the fans with new recordings despite the lack of a record contract and to take „the exploitation chain“ into their own hands.

This cassette contains no less than four songs about motorcycling, namely the original compositions

(We will come back to the topic of „Motorcycle Songs“ in connection with the song „TT 92“ and the performances of the Steve Gibbons Band at the motorcycle races on the Isle of Man, which were as strange as they were insane and life-threatening)

In addition there are again cover versions and foreign compositions:

There was also the original composition „Don’t Let`em Get Ya!“.

Many songs from the cassette were later used as bonus tracks

The following year 1986, however, turned out better for the Steve Gibbons Band. And for Steve Gibbons in March of that year, probably a dream that almost every rock musician has came true: To be on stage together with a Beatle!

The occasion was a charitable one. Bev Bevan, the former drummer of The Move and co-founder of the Electric Light Orchestra (ELO), was looking for supporters in the Brum music scene for a charity concert in aid of the Children’s Hospital in Birmingham.

so the probably biggest names of the Midland music scene at that time, responded.

took part in an event that was entitled „Birmingham Heart Beat 1986„.

The sold-out concert, which was later broadcast in excerpts on the BBC, was presented by comedians Jasper Carrott and Peter Powell. Also speaking were the singer and guitarist of Slade Noddy Holder and Jim Davidson, also a well-known comedian. There was also a greeting address from Bob Geldorf.

Well thought-out appearance of the SGB

The Steve Gibbons Band kicked off the long concert day with a performance of only three songs, but it was well thought out and showed the band in different facets.

They started with „Personal Problem“ (in the English-language Wikipedia article on Birmingham Heart Beat 1986″ mistakenly called „Share It With You“).

The last single of the Steve Gibbons Band

The song is an original composition by Steve Gibbons and was released as a single, the last single of the Steve Gibbons Band ever, in the UK on the label Aura, in Germany on Bellaphon.

One can assume that the label had expected that the appearance on Heart Beat 1986 would bring the song some popularity.

Also the B-side gives the impression that the whole concept of the single was very commercial. It contained „Old Time Rock`n`Roll“, which was originally written by Bob Seger, whose English edition Gibbons was, according to some.

Steve Gibbons as „Bob Seger No.2“, wasn’t that a marketing strategy which had failed in the past ?

Because the Americans were happy with their own Bob Seger. A reviewer on ITunes put it this way:

A critic once called Steve Gibbons „the English Bob Seger,“ which, as descriptions go, could have been much worse. … The trouble was that being the English Bob Seger meant little, if anything, to most American rock fans (who preferred their own Seger by a wide margin), and Gibbons‘ career never amounted to much in the U.S.; he was fairly popular in England, though.

And others, including US critic Robert Christgau, had doubts whether Bob Seger really deserved the status he was given:

young Bob Seger … a craftsman who hadn’t yet mastered his craft.

Back to the concert: „Personal Problem“ presented itself as the ideal opener for a concert lasting several hours with many different groups, performed vividly by a powerful band that played loosely from the hip and straight ahead. There you sit attentively in front of the TV, even if you’re just waiting for musicians who should come later!

Soft song in the center

This was followed by „Till The Well Runs Dry“ from the second album „Rollin`On“, which took half of the whole performance time. A slow song with many shades. Elegantly arranged, Gibbons sings and speaks with three different voices (including a recited part a la „It’s now or never“).

And the guitars, the guitars! They flow along, fretboards are used over the whole length and sounds are flowing out like endless rain into a paper cup, they slither while they pass across the venue.

Here you can see that this version of Steve Gibbons Band was no longer behind the former Steve Gibbons guitar duo in terms of guitar technique.

While listening to that song, you wonder once again whether Steve Gibbons and his band could not have been much further ahead if this quieter side had been more in the foreground in the marketing and during live performances. After all, there are more people who eat honey for breakfast than those who eat thumbtacks.

At the end of their performance at Birmingham Heart 1986, they returned to rock with lyrics that probably spoke to most people’s hearts in the sold-out Birmingham event hall. B.S.A., the wonder motorcycle from Birmingham was praised!

„Johnny B. Goode“ with ex-Beatle George

However, Steve Gibbons was not allowed to go home after this successful performance.

Hours later ELO finished their concert with the Chuck Berry song „Roll over Beethoven“ in their bombastic version.

After that another Chuck Berry song was played, which was sung by all artists together: „Johnny B. Goode“. But the focus was on the last guest of the evening: It was none other than George Harrison.

The number was not necessarily the musical highlight of the evening but for the audience and fellow musicians it was certainly the emotional peak of the event, simply because a Beatle was on stage.

Nevertheless Steve Gibbons should not consider this concert as the „absolute pinacle“ of his career, but another one. Two Rolling Stones and an Elvis guitarist as a backup band beat a joint performance with a Beatle in the eyes of some people. (More about this later, when we report about the year 2004)

„On The Loose“ the next live LP

In 1986 „On the Loose“ saw also a regular LP release by the Steve Gibbons Band, a live album that immortalized a performance at Dublin Castle in London. Dublin Castle is a historic venue in London. Originally built as a place for Irish „navvys„, i.e. railway workers, it was so successfully developed into a venue by Alo Conlon from the 1970s onwards. The venue gave so much impulses to the music scene (Madness, among others, drew attention to themselves here) that the death of the landlord was even worth an obituary for the British Guardian.

On „On The Loose“ you can hear another incarnation of the Steve Gibbons Band, as Roger Inniss, who comes from the Caribbean, replaced Derek „Dangerous“Wood on bass.

The rest of the band was unchanged compared to the line-up from the second GDR tour (Steve Gibbons, P.J. Wright and Alan „Sticky“ White).

Of the nine songs on this live LP, three are cover versions (two are Bob Dylan, namely „To Be Alone With You“ and „Like A Rolling Stone“, two songs the band had already performed at the Rockpalast gig, and „Down The Road Apiece“ is a boogie-woogie song by Don Raye, which the Rolling Stones had also covered).

The rest are previously unreleased original compositions. So despite the lack of a record deal the output the output of new songs continued. If you count the songs that were later released as bonus tracks on various Reissues, you can add up that the band could have recorded a veritable studio album at that point of time.

Gibbons wrote two of these songs („Love Part One“ and „Love`n`Peace“) together with P.J. Wright.  The first one is a more commercially oriented love song, while the second one is almost prog rock in places and therefore has a special place in Steve Gibbons‘ catalogue. The slow introduction is followed by fast parts with prominent keyboards, which are replaced by driving guitars.

The title of the album again ties in with the band’s gangster image: While on the previous live record they were „Caught In The Act“, they were now „On The Loose“. Was the title also an allusion to the fact that you didn’t have a longer record deal anymore?

The gangster image also took up the record cover. It shows Steve Gibbons with an impressive hair quiff in profile like on a police photo. And the writing of the title of the LP resembles an authority stamp, like it is pressed for example on discharge papers: 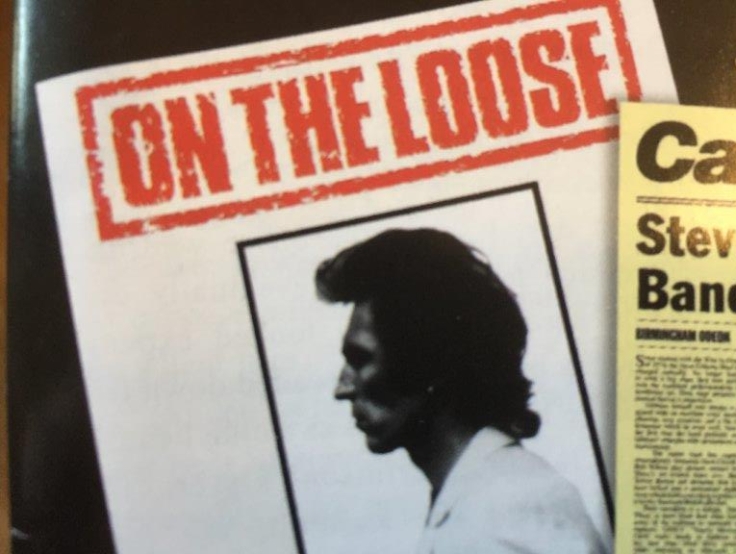 The songs, like on „Caught In The Act“, are all going straight. There is only a thoughtful pause for breath in the introductory part of the penultimate song „Love`n`Peace“, which deals with the religious conflict in Ireland, among other things. „If this goes on like this, a mushroom, bigger than an atomic mushroom will turn the earth into a no man’s land“, it says. Fears that dominated the 1980s.

Although there is no Chuck Berry cover version on the album, the old master cannot be missing. Steve`s own composition „Chuck In My Car“ describes the invigorating effects of Chuck Berry songs while driving a car. The concluding „Like A Rolling Stone“ comes here more directly and more from the hip than the reggae-braked version at the Rockpalast concert and thus does much better justice to its function as a celebratory anthem at the finale, including band introduction and overflowing instrumental parts towards the end, than the „Berlin version“. (The CD reissue still contains bonus tracks, these will be addressed in connection with the re-release).

„On The Loose“ is no „Caught In The Act no.2“, but the attempt to imitate this record was not made by „On The Loose“ anyway. „On the Loose“ stands independently next to „Caught in the act“ and at the same time in its shadow. But this was only because many potential record buyers had not even known about the existence of this record, which was only distributed by the record company Magnum Force in the UK and by Desperado Records in Scandinavia.

Otherwise, the same applies to this record as to all other live recordings of the Steve Gibbons Band:

Each presents the band in a certain phase of development, in which different musical accents are emphasized, and thus has its own place in the complete catalogue. Many bands have released several live recordings and you often wonder why, as the differences between them are often rather marginal. With this band this is definitely different!

Click here to read more about the next two recordings of the band. (Still in progress)

And here you can find an overview of the 1990s.