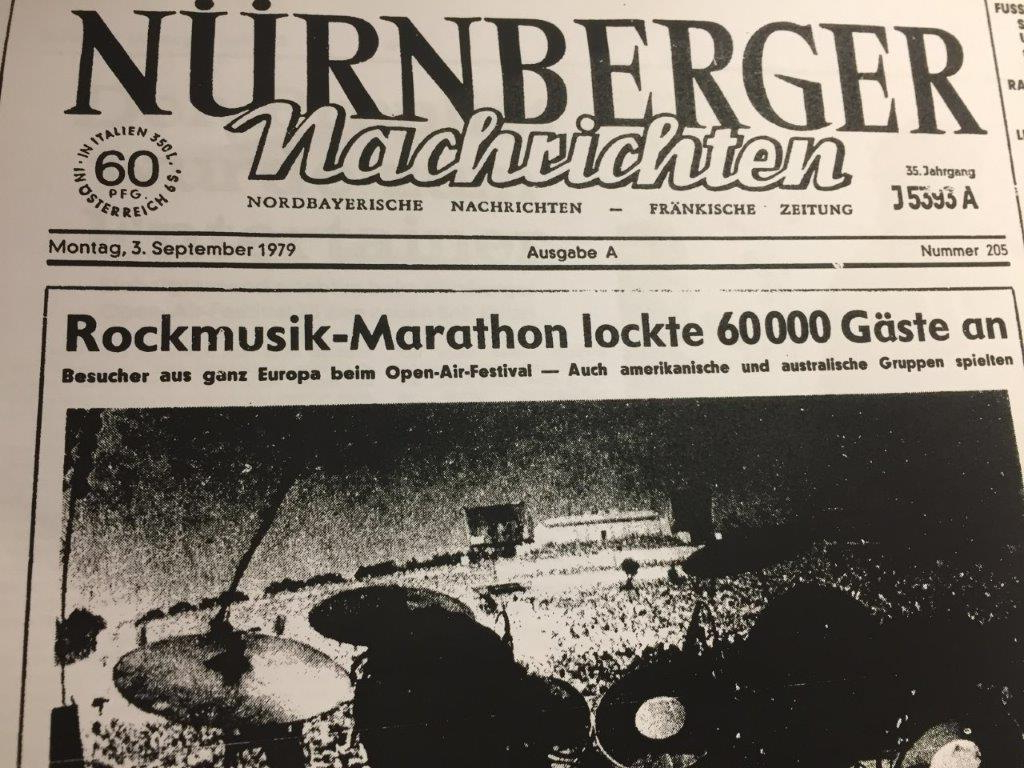 „Down in the Bunker“ was a big hit with the critics. Realistically, the band’s joy about it might have been limited, because the record company, which had pre-invested a lot in the production and the advertising campaign, wanted to see a good return-of-investment before renewing the record deal.

That’s why tours to promote the album were the order of the day.

At the same time, the record company itself tried to earn an extra income with the Best of LP „Get Up and Dance“, which was released in Germany, Ireland and Scandinavia, in addition to the three studio LPs and the live LP album released so far. 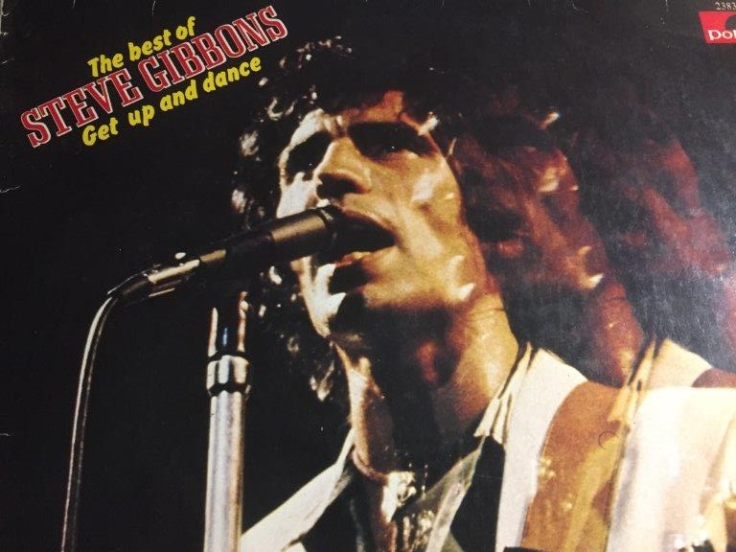 In Great Britain, a Best-of- LP was not released until the following year, without the addition „Get Up and Dance“ and with a different tracklist but with the same cover photo.

The following songs were chosen as „Best of“ for the listeners in Germany, Ireland and Scandinavia

In comparison with the LP released in the UK a year later, one can see that „Eddy Vortex“, „Tulane“, „Johnny Cool“, „No Spitting On The Bus“, „Down In The Bunker“, „Mr. Jones“, „Git It“ and „Gave His Life To Rock’n Roll“ were probably considered `international` by the record company, while

rather than continental European and Irish favourites, which were withheld from the British best-of-buyers, while

only put for the British buyers in the compilation.

Tours for „Down in The Bunker“ only in Europe

Although the record company had placed advertisements for the album „Down In The Bunker“ in US music magazines, the band did not tour there (had they already written off the market there?), but first went to Scandinavia, where the band and their new album obviously had some of their most loyal friends.

Scandinavia tour with a smaller line-up

But for this tour the concept of the performances had to be changed. The fault was a cigarette machine in Germany.

Bob Wilson had injured his hand at such a machine, so that could not take part in the tour to Sweden tour in April 1979. Accordingly, the repertoire had to be changed so that it could be performed on stage with the remaining group without any major cutbacks.

Therefore especially all pieces with piano accompaniment were cancelled. For example the song „Big JC“ from „Down In The Bunker“ had to be removed from the program.
Also otherwise the reduced group seems to have „turned up the heat“. The Swedish music journalist Hakan Pettersson even saw the danger that the group would lose its original audience. And on „Any road up“ he heard „wild and ruthless solos“ from the remaining guitarist Carroll and the saxophonist Nick Pentelow, which he described as „more selfish journeys than musically motivated“.

In the spring of 1979, German viewers could also experience a more than one-hour „Musikladen Extra“ programme with the Steve Gibbons Band, which had already been recorded on 7 November 1978.

The „Musikladen“ (music store) was one of the few niches with rock music in German television, which was still dominated by public broadcasting at that time. It was the successor of the „Beat Club“, the first music show with English-speaking performers on German television.

The programme was founded because radio and television executives had noticed that the target group of teenagers up to the mid-thirties was increasingly turning their backs on the German radio media and was migrating to Radio Luxemburg, soldier stations such as BFBS or AFN or to pirate stations.

„Musikladen“ was produced by Radio Bremen. A total of ninety episodes ran from 13 December 1972 to 29 November 1984. In addition to regular broadcasts, in which several performers appeared, each with one song, there were occasionally „Musikladen Extra“, in which selected performers played a whole set live. Other groups that appeared on the show included The Doors (without Jim Morrison, who was already dead), Duane Eddy, America, Randy Newman and Van Morrison.

The show, which can also be found on YouTube, was announced in the Musikexpress of 2 March 1979 with the words

The proramme featured songs from „Down In The Bunker“. In addition to that there was (of course!) „Tulane“ as well as classics from the band’s live program like „Mr. Jones“ and „Git it“. Furthermore, „Gold Coast“, a then unreleased song, was played. („Gold Coast“ first appeared as a bonus track on the 1988 CD release of „Down In The Bunker“). Finally Trevor Burton sang „Satisfying Moves“.

The setlist in detail:

On solo paths with Pete Townsend

In the summer, Steve Gibbons then went solo to help an old friend and supporter with a good cause.

Pete Townsend performed at a charity concert in Finsbury Park on 13 July 1979 in support of „Rock against Racism„, an event that was also the result of verbal derangements by David Bowie and Eric Clapton.

He was supported by Steve Gibbons on some of the songs. Unfortunately it is not possible to determine exactly which ones these were. The setlist consisted of „Won`t Get Fooled again“, „Big Boss Man“, „The Real Me“, „No Spitting On The Bus“, „Blue Suede Shoes“, „Tatoo“, „In The Cupboard“, „Bargain“, „Drowned“, „Let`s See Action“ and „My Generation“.

His own song „Spitting On The Bus“ he will have definitely sung himself. And the following „Blues Suede Shoes“ would also fit him perfectly.

On 1 September 1979 they played again as support act for The Who.

The Who were booked as headliner at the Nuremberg Open Air for this day. This was a special concert for a number of reasons:

Even though the Steve Gibbons had appeared in America as support band for The Who in front of similarly large audiences, this concert was something special.

Nürnberg 1979, for Gibbons the beginning of a long friendship

That this was something special for him can still be heard in his voice when he talks about it. (An interview that Steve Gibbons gave to the author of this website for the former „Germanbeat.de“ site, and in which he also talked about the festival gig in Nuremberg, can still be found in the Internet Archive).

Although after a life full of touring he understandably mixes up venues and dates, he remembers the date of this event: September 1st, 1979.

Maybe this is also because with this concert he laid the foundation stone for a fanbase in Nuremberg and the neighbouring Franconia, from which he should still profit decades later. A result of this special relation to this area is the fact that the live DVD „Live a Kofferfabrik“ was recorded in 2009 (albeit in front of a much smaller audience) in the neighbouring city of Fürth in Nuremberg.

For the „Nürnberger Nachrichten“ the festival at the Zeppelinfield was the lead story on Monday after the event: „Rock music marathon attracted 60,000 guests“ was its title

(On the same first page there were other headlines such as „For the first time an old nuclear reactor is being demolished: Niedereichbach reactor to disappear – it was in operation for a year and a half“  and „IRA threatens new murder campaign“.)

Here is a view of the festival grounds with an old Super 8 film, which Bernd Kunze has kindly put on You Tube. Let yourself be carried away into the atmosphere of the 1970s!

Nine groups were on the programme. When Steve Gibbons and his band entered the 20 m long and 13 m high stages, Eduard Zankie, Molly Hatchet and Nils Lofgren had already completed their performances.

Nils Lofgren’s performance was praised by the Nürnberger Nachrichten because of „insane licks“ and „breaks in play with capers on the trampoline“. Obviously the author seemed happy to be able to report about something much more down to earth afterwards. He wrote about the performance of the Steve Gibbons Band:

„Steve Gibbons didn’t need that kind of gags. He brings pleasantly clear, structured British rock ’n‘ roll. Fullness and colour come from a saxophone set and two background singers. In his music, the calm anti-star wants to preserve something of the time „when English musicians with all their equipment still fitted on the back of those trucks that were on the road to small gigs on the continent“. He doesn’t like „polished sound. There must be some rough edges.„The result was an exciting and stimulating sound, where the musicians have mor

The to say than the sound mixers. Gibbons‘ music is a reflection of the industrial district of Birmingham. His witty lyrics deal with the morning bus ride to work and his music resonates with the pub pianos of the workers‘ pubs as well as the street parties of the West Indian immigrants. (Extract from the „Nürnberger Nachrichten“ of Monday, September 3, 1979) 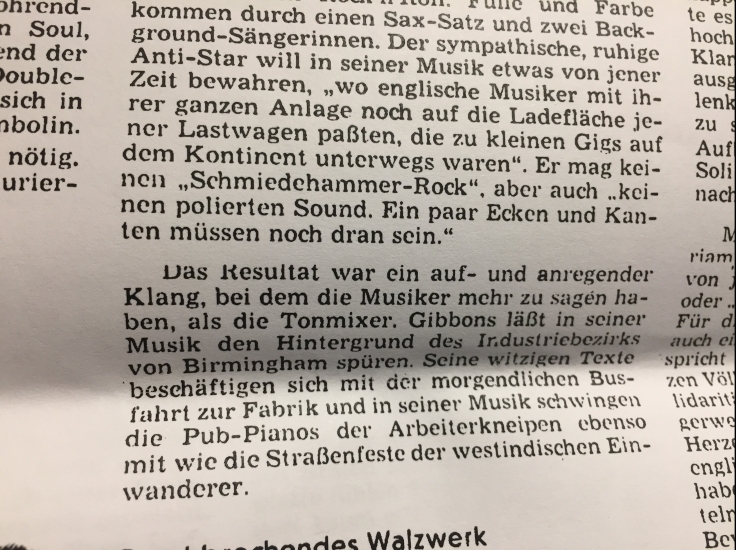 Des Tong, musician and music journalist from Birmingham, who at the time was a member of Nils Lofgren’s band which played before the Steve Gibbons Band, recalls in an interview that he conducted with Trevor Burton:

We did this big place in Nuremberg. You guys turned up, just came in, did the set, blew everybody away and where out the door again. … Fantastic! You were so tight.

On the same occasion, Trevor himself recalls the time with SGB as four years of being on tour continuously. Before the Nuremberg concert, they had already been on tour in Germany for six weeks, so it didn’t take them any time to warm up.

What Trevor didn’t know at the time of the Nuremberg concert: A little more than a year later, as a member of the Steve Gibbons Band, he was to be one the member of the first white western rock group to be allowed to tour extensively through the GDR.

However, of the Nuremberg line-up, only he and Steve Gibbons were to belong to this band. So Nuremberg was one of the highlights and the finale of the first classic edition of the Steve Gibbons Band. Already the next LP should be recorded with a new line-up.

And at the next concert highlight, the Rockpalast performance, there were already completely different musicians as Steve Gibbons Band on stage.

Turbulent times were ahead!

Here you will find the overview of the 1980s.