Source of the picture above: WikiCommons Jean Luc Ourlin https://www.flickr.com/photos/52489759@N00

Soon after Gibbons and Townsend first met, the Steve Gibbons Band began to perform as support band for The Who, who were one of the most sought-after live acts on the international scene at the time.

This broadened the horizon considerably. Spain with the Dominettes as well as Germany and Scandinavia with the Ugly`s may have been interesting. In the slipstream of The Who, however, the jump over the Ocean as support act was successful.

The Who – At that time the live group par excellence

The Who were the live group par excellence at that time. 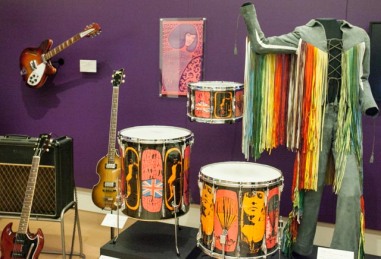 Bildquelle: By Frank Kovalchek from Anchorage, Alaska, USA – Stuff from The Who, CC BY 2.0, https://commons.wikimedia.org/w/index.php?curid=33732668

The BBC documentary „For One Night Only – The Who Live At Leeds“ speaks of a „transcendent“ relationship between the musicians of The Who, which allowed them to react spontaneously to the improvisations of the others.

And since they were one of the first bands to have their own PA system, the energy was also felt by the audience. At least if you believe the aforementioned BBC report, they even outdid bands like Led Zeppelin, who at least at that time were rather disappointing at their concerts because of their small, borrowed amplification systems. The Who was not supposed to let that happen on the 1975/76 tour: Their new amplification system produced 76,000 watts at open-air concerts, in halls it still produced 56,000 watts.

So it was not without danger to play as support band of The Who! Although you became better known that way, there was also the danger of „drowning“ and being ignored or perceived as a bore by the audience, which was just waiting for the main group.

This is illustrated by a quote of „Mike The Who“, who according to his own description is „a Dublin music fan, singer, songwriter, guitar enthusiast and DJ, presenter and producer of the ever popular Saturday Afternoon Classic Rock Show on Dublin City FM for many years“. Mike The Who, nicknamed as such, „due to his Who patches and badges adorning his patchouli perfumed denim clad fan traveling threads“ reminds on his homepage, that Who-fans were no usual music fans, but especially famous for their devotion, dedication, and support for the proud heritage of The Who. That’s why people didn’t just „go“ to a Who concert at that time, but made a pilgrimage there. He describes the feelings on the way to his first Who concert like this:

This was my pilgrimage to Lourdes, being swept along amidst a sea of similar like minded fans on their way to pay homage to these gods of live rock music.

In a situation like this, it can end quite badly for a support group if you don’t succeed in getting the audience excited!

All the more so as The Who offered a unique show in addition to gripping music: 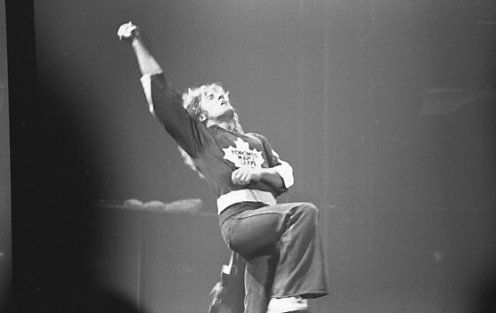 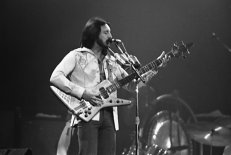 No wonder that the Who tour was announced under the not so modest motto „The Greatest Rock`n`Roll Band In The World“.

Wednesday October 15th 1975 at the Glasgow Apollo theatre, with support from the Steve Gibbons Band. It’s a night that I’ll remember as long as I live. The Greatest Rock n Roll band in the world LIVE right in front of my eyes. I still get goosebumps. Phew !! I’ve seen them many times since, in many different line-ups, always exciting, always giving their all. But that first time…

In the same year, several concerts in Germany followed, including two in Stuttgart, namely on 2 and 3 November 1975 in the exhibition hall. There is also a bootleg of the first of them from the performance of The Who.

Still without an own record in their luggage the Steve Gibbons Band went on a big USA tour „from Coast to Coast“ in spring 1976.  There everything was one or two numbers bigger than in Europe: In the USA they played in front of crowds of up to 80.000. And the smallest concert was attended by 12,000 fans.

Despite these impressive visitor numbers, the external conditions were not always good. And so the start in the USA was not made easy, also because of technical adversities.
On March 30th, the newspaper „Oregonian“ wrote about the concert in Portland on March 24th, which cost the then impressive sum of $8.50 in advance sales, that the sound system (but obviously also The Who) had weakened in the process:

The Who concert last week was a good one but not without problems. Peter Townshend and Keith Moon seemed to be having some hasles of their own out of eye contact with most of the audience on the back of the large stage. Roger Daltrey was visibly either very ill or very upset; it turned around later that he was suffering from possible flu symptoms.
And the sound system was a little too soft for both bands. It was a new setup, according to Peter Meaden, manager of the Steve Gibbons Band, and seemed to put a damper on some of the music. Gibbons was irritated with the sound his band was producing, although the first couple of rhythm and blues-early rock and roll songs came off nicely.
Gibbons said after the show that the system took away some of the gutsiness and power his group needs to get its music across.
The lightning for the concert was superb, however especially the multicolored and multibeamed laser lights that covers the Coliseum on several tunes. It was a beautiful and dramatic effect.

Encores in the Cauldron

The concert halls there must have been like a veritable cauldron.

At the fan reviews on www.thewholive.net a certain Mark Closkey writes about one of the two concerts in Winterland in San Francisco in 1976:

…. People had been waiting days camped outside Winterland to be able to get up front. There was a commotion at the front of the line, and all of a sudden, WHOOSH! everyone was running thinking the doors were opening. ….. Spooky to think what happened in Cincinnati 1979 could have happened here.

As a reminder: In 1979, eleven visitors to a concert of The Who died in Cincinnetibecause a stampede had occurred during the rush to the hall because only two entrance gates had been opened for almost 19,000 visitors.

The visitor further describes the atmosphere as follows:

Once inside, the hype and anticipation of 5500 lucky ticket holders made the hair stand up on the back of my neck. When The Who came out, the entire crowd not only stood, but began jumping up and down and screaming. The show was fantastic, Moon was in control of his substances, and the band just killed on every song. . . .I don’t think I’ve ever seen a show like it since.

It certainly wasn’t an easy task for the Steve Gibbons Band to perform as support act in such an atmosphere. As it was only announced namelessly as „support“ on the tickets, most listeners probably did not know in advance who would open the concert-

At least at the Billboard outside the venue the band was all were announced by name. 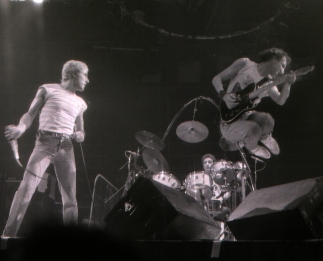 By the way, despite the limited number of concert tickets, not all the audience were The Who experts. A certain Dan Cooper remembers this in a fan review:

A girl next to us said during the opening of Pinball Wizard, „Oh!!! They’re playing an Elton John song!!!“

Apparently, the Steve Gibbons Band was able to break the ice both with music experts and those who couldn’t distinguish between The Who and Elton John songs. Steve Gibbons  in an interview given to the author of this homepage, mentioned that during the support tour „…it was almost always going really well for us, actually. Having to play two encores is something when you’re the support act and the main act is called „The Who ... It worked out very well with the American audience.“

And also the concert goers confirm this impression. One of them still remembers decades later:

I saw The Steve Gibbons Band supporting The Who in Leicester in ’75. They were terrific.

And the later deputy editor of the British edition of „Sounds“ Barbara Charone summarizes the result of the US tour with The Who as follows:

Since touring with the Who in October of ’74, the Steve Gibbons Band have changed radicially. No longer hestitant to work a big stage, they now perform with the confident professionalism of a headline act. Their stage presence and musical finesse is impressive.

So the tours with The Who had brought the Steve Gibbons Band quite a bit further!

Paris in the moonlight of a special kind

However, at the end of the extensive tours, back in Europe, it was made clear to the Steve Gibons Band at a concert in a way that was as original as it was vivid, that some listeners were not in the mood for any support groups. This happened in a city where one would have expected more perfect manners, namely in Paris.

I saw the Steve Gibbons Band open for The Who in the fall of ’75. The concert was in Paris and it took place in a livestock pavilion with straw on the floor and bleachers on the sides. The SG Band was very good, but Parisian audiences had little tolerance for opening acts. Men on the general admission floor were routinely pulling down their trousers and shooting the moon a the stage. And I’m not talking about a few guys… I’ll bet 40 or 50 people did that. It was pretty funny.

So the audience was not only not interested in the opening act, but in front of the stage about fifty men dropped their trousers and presented their bare butts to the Steve Gibbons Band. But that didn’t prevent the band to finish their set professionally.

Even decades after this incident Steve still remembers this event. However, he sees the reasons for this behaviour less in the „attractiveness gap“ between the front and main group than in the British stage decoration, which might have disturbed the proud French: He remembers:

Only in Paris, things were not going so well. We played there for two evenings in a market hall that had been converted into a concert hall for these concerts. Our stage show included a Union Jack. I don’t know if it that was the reason. Anyway, we got thrown all kinds of things at us from the audience.

The US tour at that time was finally the last of the Who with Keith Moon on drums. Surely there would be a lot to tell about the time on the road with The Who just because of this brilliant drummer. After all, he was a chaotic guy, maybe even a paranoid, and certainly a poor sausage somewhere!
And there must have been a lot going on backstage and in the tour hotels at that time. The second volume of Christoph Geisselhart’s three-part work „Maximum Rock – The Who The history of the world’s craziest rock band Vol. 2: 1971 to 1978“ gives some insight. There is talk of it,

Moon, who started to use cocaine on this tour – in addition to taking other substances he had been practicing for a long time – was supported by the manager of the Steve Gibbons band Peter Maeden (who was to die of drug abuse a few years later).
The Steve Gibbons Band should be able to tell a lot about these events and would certainly have one or the other unknown anecdote at hand!
Click here to continue.